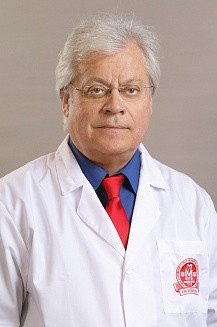 In 1982 he graduated from the 1st MMI named after THEM. Sechenov. After graduation, he entered the clinical residency at the Department of Obstetrics and Gynecology, 1 medical faculty, 1 MMI, which he graduated in 1984. In the same year, he entered full-time postgraduate study at the same department. In 1987 he defended his thesis under the supervision of Professor N.M. Pobedinsky. Since that time (1987) he worked in the same department as an assistant, and since 1994 as an assistant professor.

Since 1983, he participated in the development of scientific programs in laser medicine and chemical-physical technologies in the framework of cooperation with research institutes of the Russian Academy of Medical Sciences and the Russian Academy of Sciences. Since 1982, a participant in the annual All-Union and All-Russian congresses, congresses and conferences on laser medicine, obstetrics and gynecology.

In 1997, he defended his thesis for the degree of Doctor of Medical Sciences with a degree in Obstetrics and Gynecology. Since 1995, a member of the Interdepartmental Scientific Council of the Ministry of Health and Social Development.

In 1998, Zuev V.M. awarded the academic title of "Professor". From 1997 to 2009 He worked as a professor at the Department of Obstetrics and Gynecology of the 1st Medical Faculty, and then the Department of Obstetrics and Gynecology No. 1 of the Medical Faculty of the Moscow Medical Academy named after THEM. Sechenov. In 1998, he was elected a full member of the Laser Academy of the Russian Federation, and in 2002, a corresponding member of the Russian Academy of Natural Sciences.

In 2000-2004 and 2009-2010 At the same time he worked as chief physician at the Clinic for Obstetrics and Gynecology V.F.Snegireva MMA named after THEM. Sechenov.